“It’s beautiful when we play together,” drummer Mangue Sylla said, referring to dancer Nimatoulaye Camara. “The drum speaks with the dancer.”

Ailey Extension offers a wide variety of West African dance classes at our New York studios. However, we only offer two authentic Guinean experiences. There’s a weekly dance class with Nima and a monthly Djembe & West African drumming workshop with Mangue. This duo has played together for decades and still often perform and teach classes together.

Mangue started playing as a child and believes his ancestors bestowed the gift of drum upon him to share with others. He has performed and taught in Japan, China, Mexico, Jamaica, Germany, France, and more.

Knowing that some people might be nervous about taking his workshop, Mangue explained that no experience is necessary.

“Everyone has rhythm and music," he said. Your heart starts beating when you are in your mother.”

The djembe drum has the power to lift your spirit, according to Mangue. In his workshop, he’ll help you to find your rhythm and communicate with other people. He wants students to leave with a profound since of positivity.

“Drumming makes you forget the bad in life - it changes you. In Africa, we call it the magic drum.”

Perhaps that sense of magic is what lured Ailey legend Judith Jamison to try it. “Wow! I was so happy to see her in my class. It made me proud to teach her to play drums.”

Let Mangue teach you a rhythm or two in his drumming workshop. In addition to having a new experience connecting with the drums and other students, you might just meet a legend. 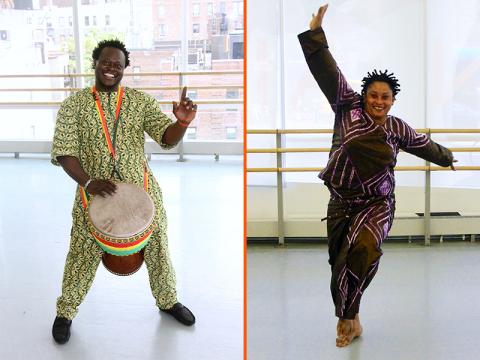 A celebrity in her own right, Nima has been compared to Michael Jackson, and has been invited to dance at an endless number of performances and special events. Nima started dancing at 10-years-old and could barely concentrate on her school work after taking up the art form seriously.

“I told my mom, when I’m sitting in class, I’m thinking about dance.” Her mother supported her interest in dance and now Nima is a world class dancer who has performed in several countries, including Japan and Australia, to name a few.

In Guinea, she was a principal dancer for Les Ballets African and National Ballet of Guinea. More recently, she has performed with WOFA (a company named for the Guinean Sousou word which means “let’s get together”).

For Nima, it’s all about the drums - the nature of call and response that is such a staple of African culture. “You ask me a question; I give you an answer.”

However, Nima asserts that Guinean culture is different and shouldn’t be lumped together with other West African dance genres. “It’s like a language. Everyone doesn’t speak the same.” There are more specific movements that you won’t find in any other class at Ailey. So give this dance class a try. It might be easier than learning a new language.

In her Sunday class at 5pm, she’ll teach you to dance with a joyous spirit to the rhythm of Mangue’s djembe drums.

Interviews conducted by and blog article written by PennyMaria Jackson.