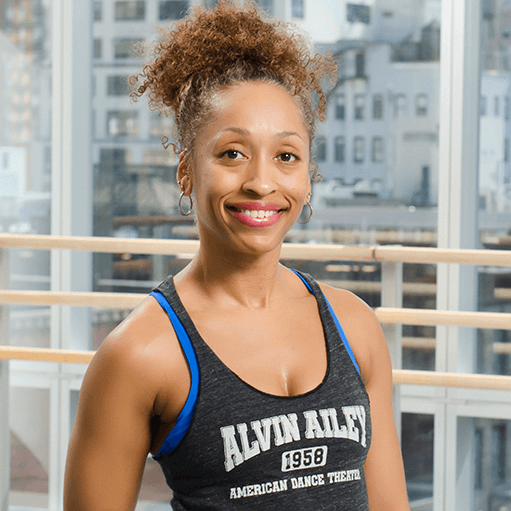 This class will teach students the basic fundamentals of the Horton technique, the foundation of choreography performed by the Alvin Ailey Dance Company.

Zumba® is a fusion of Latin and International music with dance themes that create a dynamic, exciting, effective fitness system!

Karen Lynell Arceneaux, (Gonzales, Louisiana), the proud mother of a 17 and 19 year old (girl and boy respectively), received her B.F.A. in Choreographic Design from the University of Louisiana-Lafayette (ULL). Arceneaux has trained at the American Dance Festival in North Carolina, The Martha Graham School of Contemporary Dance and The Ailey School. Karen is NASM certified, AFAA certified, and a licensed Zumba instructor.

Get to Know Karen

After graduating from The Ailey School, Arceneaux worked as the administrative assistant to the School Director and B.F.A. Program Co-Director. She later served as the school administrator from 1999-2004. She has choreographed for The Ailey School’s Student Performance Group, Student Showcase Group, The Ailey/Fordham B.F.A. Program in Dance, Ailey’s Professional Performing Arts School program and ULL. In addition, Arceneaux has also choreographed for the play “Faustus/Faustus”, directed by Matthew Maguire, working with dancers in the Ailey/Fordham B.F.A. Program and actors in Fordham University’s Theatre Program. She has been a member of Footprints Dance Company and Earl Mosley’s Diversity of Dance Series. She has also served as a guest teacher and artist-in- residence for Earl Mosley’s Institute of the Arts in Connecticut. She has taught extensively in Eastern Long Island, working with elementary to high school students of the Bridgehampton School, East Hampton Town Senior/Youth Center, Amagansett School, the Children’s Museum of the East End and Guild Hall. Since 1999, she has choreographed for the annual Christmas concert at Saint Paul’s Church in New York, working with dancers in the Ailey/Fordham B.F.A. Program in Dance.

For four years, Arceneaux served as an adjudicator for Long Island University’s (C.W. Post campus) annual dance conference and was a guest choreographer for its annual fall and spring showcases. Currently, she is the Founder and Artistic Director of Genesis Dance Company, L.L.C., established in 2001. As the director of Genesis Dance Company, her work have been presented at the NuDanceNow Festival at The Riverside Theater; the International Dance Festival at The Duke at 42nd Street; The Ailey Citigroup Theater and the DiCapo Theater; “Afternoons” at LIU at Kumble Theater for Performing Arts; the MOJA Arts Festival at the Gaillard Auditorium in South Carolina; CT Meets NY Dance Fest at The Crystal Theater in Connecticut and Dance New Amsterdam in NY; and Community Works’ Celebration of Women’s Month at Kumble Theater for the Performing Arts and Hostos Center for Arts and Culture. A former adjunct professor at Nassau Community College, Arceneaux holds a Master of Arts Degree in Organizational Management from the University of Phoenix, and is an instructor for The Ailey School, and The Ailey Extension program. She has also served as a teaching artist for Alvin Ailey’s Arts- in-Education Program and has taught at Connecticut Ballet and in various public schools for Opus Dance Theater. She has choreographed for the Horton Performance Workshop for the Kat Wildish Performance Showcase and she continues to choreograph for The Ailey Extension’s Student Performance Workshop, Voices and Visions, and Summer Experience presented in The Ailey Citigroup Theater, the latter presented in The Ailey Studios. Her work can also be seen performed by her students in The Ailey School’s Junior Division Program for the yearly spring performances at Hostos Center for Arts and Culture.